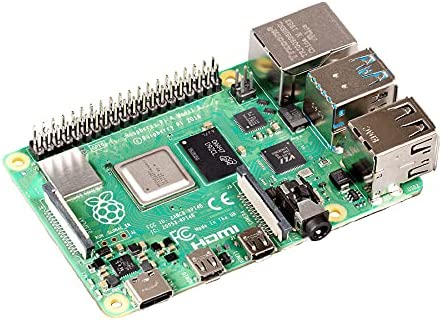 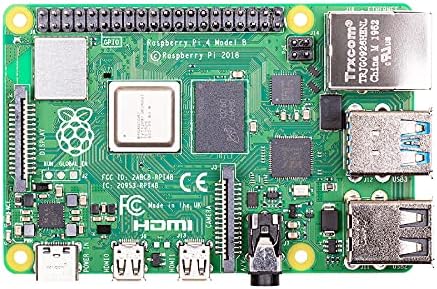 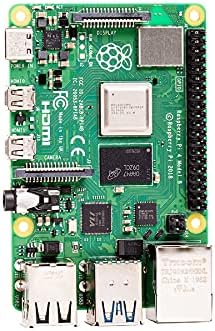 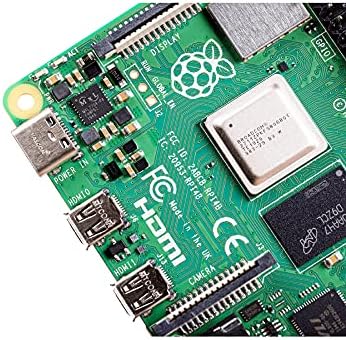 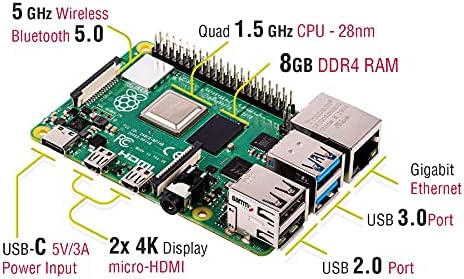 Raspberry Pi 4 Model B is the latest product in the popular Raspberry Pi range of computers. It offers ground-breaking increases in processor speed, multimedia performance, memory, and connectivity compared to the prior-generation Raspberry Pi 3 Model B+ while retaining backward compatibility and similar power consumption.

This product’s key features include a high-performance 64-bit quad-core processor, dual-display support at resolutions up to 4K via a pair of micro-HDMI ports, hardware video decode at up to 4Kp60, up to 4GB of RAM, dual-band 2.4/5.0 GHz wireless LAN, Bluetooth 5.0, Gigabit Ethernet, USB 3.0, and PoE capability (via a separate PoE HAT add-on).

The new Raspberry Pi 4 has different versions depending on the size of RAM, and you can choose according to your needs:

Compatible with Grove Base Hat for Raspberry Pi

We have released a lot of add-ons in the past for the Raspberry Pi. All these hats, displays, cases, power suppliers, and other accessories will give your Raspberry Pi more features and possibilities.

You can easily use most of the Grove modules with your Raspberry Pi 4 and build exciting projects!

Raspberry Pi High Quality Camera just got released and it is perfectly compatible with Raspberry Pi 4 Computer Model B 8GB.

Get one and have the best experience in your computer vision and camera projects!

High resolution in images and videos, and easy to be plugged in, provide the best experience for your media projects.

We have released re_computer case which is specially designed for the re_computer system and it is suitable to use with the Raspberry Pi 4 as well.

The re_computer case can not only install the ODYSSEY – X86 board, we have designed and left screw holes for the installation of the most popular SBCs including Raspberry Pi, BeagleBone, and Jetson Nano.

powful cputhe cpu of the raspberry pi 4 model b adopts the latest arm cortex-a72 architecture, which is also used in high-performance smartphones, and has evolved into a real pc.the operating clock has been changed from pi3’s 1.2ghz to 1.5ghz, and the speed has become a different dimension with the updated architecture.
video output/gputhe on-board gpu of the raspberry pi 4 supports 4kp@60 and newly supports h.265 decoding, opengl es 3.0, etc.as for the video output, two micro hdmis with smaller connectors are installed, and the raspberry pi 4 also supports dual screen output.
usb 3.0with a new soc, the speed of the raspberry pi 4 around i/o has been improved, and finally usb 3.0 is supported.usb boot is faster and more convenient.
network&bluetoothgigabit ethernet (wired lan) has also been significantly speeded up from 300mbps of pi 3b + to 1000mbps (logical value).in addition, bluetooth supported version has been upgraded to 5.0, and the transfer speed of pi 4 has been doubled.
power input connectorthe power input connector of the raspberry pi 4 has been changed to usb type c. it is easier to use than micro usb and can supply a larger current reliably.the power requirement of raspberry pi 4 model b is 5v 3.0a, which is higher than the previous model.

Added to wishlistRemoved from wishlist 0

Added to wishlistRemoved from wishlist 0
$120.00
CHOOSE YOUR PRODUCT CATEGORY:
ABOUT 24 COMPUTER STORE
24computer.store is a member of the very well-known marketing network 24online.store, which consists of over 100 successful and highly promotional Amazon affiliate webshops.
AFFILIATE DISCLOSURE/DISCLAIMER
24computer.store is a participant in the Amazon Services LLC Associates Program, an affiliate advertising program designed to provide a means for sites to earn advertising fees by advertising and linking to Amazon.com. As an Amazon Associate, we may earn commissions from qualifying purchases from Amazon.com. We cannot provide any guarantee that the goods offered by us for purchase can actually be supplied and at the prices quoted.
Manage Cookie Consent
To provide the best experiences, we use technologies like cookies to store and/or access device information. Consenting to these technologies will allow us to process data such as browsing behavior or unique IDs on this site. Not consenting or withdrawing consent, may adversely affect certain features and functions.
Manage options Manage services Manage vendors Read more about these purposes
View preferences
{title} {title} {title}